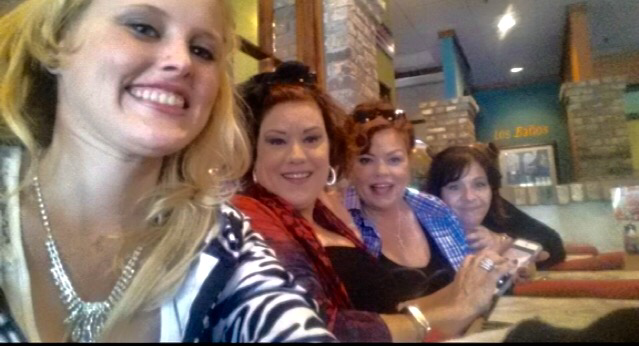 Christmas in July? My Tree and My Family Waited For Steve Daniel to Come Home For The Holidays…

Not every Christmas is “wine and roses.”  My Christmas tree makes me happy and enamored with the twinkling lights and crazy decorations that don’t match.  My tastes are eclectic and one year while waiting for my brother in law, Steve Daniel to return home from Iraq- I decided to “hold Christmas” in order for him to be able to enjoy a Christmas in July at my home aka WorthamWorld. Stephanie Hafele Posing By My Tree

Social media friends and connections that realized my tree was still up in February photos at a wedding in my home posted “take that tree down! Are you a hillbilly?” Never realizing why I had left it up to begin with.

We have friends that actually take their tree down immediately after unwrapping gifts!  What’s the hurry?  The magic of Christmas shouldn’t just die because you’ve opened the gifts under your tree.

My February wedding couple were thrilled my home was still decorated for Christmas after asking me why.  The Groom was in the Army and understood the difficulty of being home for the holidays with his family.

Everyone has a different way of letting their loved ones in the military know they are thinking of them.  Steve Daniel missed 8 Christmases along with Thanksgiving and his grand twins birthdays while working as a contractor in Iraq driving a fuel tanker.

The years he spent “saving the farm” took a toll on him after being laid off from Albertson’s after 20 years.

His calls home on holidays were often melancholy because he realized that he would never be home as long as the economy was bleak back home in Texas.

Those years were a struggle for my husband too since the real estate crash “hit home” for us leaving him unemployed for nearly three years for the first time in his life.

It was a time when my twin sister, Cindy Daniel and I were forced to “circle the wagons” doing everything we could to save our homes from foreclosure while providing for our children and grandchildren and it was a struggle that force us to recognize our resilience as a family.

My brother in law was thrilled and speechless when he walked into my home with all the gifts still under the tree that July so many years ago.  As I look back on that day, I realize that the simple gesture of leaving that tree up meant so much to him that I carried the tradition on until he came home from Camp Anaconda and found work finally back home with his family again.

Overcoming the challenges of not having money to put a few gifts under the tree no longer face us but, making gifts taught us the value of using our own skills to do something special for others.  This Christmas, a family I had married several months ago, the Bowman’s made homemade jelly for Cindy and I which was the best gift of all because it was made with love and reminded us of the many Christmases we had “struggled through” doing the best we could to put gifts under the tree that most of the lights had stopped working on.

Struggle builds character and had I not endured many struggles alongside my twin sister- I feel certain that our lives would not be as full of friends as they are today.  Friends we have met through the years by helping them with a Dream Event they couldn’t have “pulled off” on their own.

In order to understand the plight of others- you must understand the obstacles.  When I saw a way that I could help others and was in a position to do so, my family jumped in and joined me at weddings, at birthday parties, at 50th anniversaries, baptisms and funerals.  They helped me decorate venues, take photos, visit with guests and best of all- they helped me bring joy to families who had come to me asking for our help.

Ten years ago, things were very different for us.  Ten years ago, we would’ve been one of those families ourselves.  Struggling to give my son a beautiful wedding with mounting medical bills for thyroid cancer while my husband was out of work and hopeless, I vowed that if I was ever in a position to help someone else I would.  Did I ever imagine that someone would be hundreds of families?  No but, life is like that, it’s a flower and the seeds blow in the wind while bringing you a friend…