Understanding your rights for Burial Decisions in Texas

Planning for death is no easy task. Overseeing funerals and memorials is as emotional to me as a Minister as it is to the families involved with the ceremony. However, failing to make arrangements prior to an unexpected death have caused many issues to many families that could have been avoided with some forethought and legal remedies.

The right to consumers in Texas to use a Body Disposition Authorization Affidavit or similar written instrument was created by the Texas Legislature several years ago and codified in section 711.002(g) of the Health and Safety Code. The provision was embedded in the law dealing with cemeteries and was overlooked by many.

This authorization form helps consumers secure the right to specify ones body disposition. This law provides that consumers wishes as expressed in such an instrument must be “faithfully” carried out by whoever has the legal authority to control the disposition.

The other primary advantage of the Body Disposition Authorization Affidavit is it’s use by people who want to be cremated. In the absence of a properly executed Affidavit, the funeral director must secure permission of ALL IMMEDIATE family members who have the authority to control disposition. For instance, in the case of several adult children scattered across the country, this often time consuming task can delay disposition and drive up the costs of funeral arrangements due to storing of the body until all interested parties can be located.

Using a Body Disposition Authorization Affidavit eliminates confusion and allows the cremation to proceed without unwanted delay. For those interested in body donation for medical research and teaching, the form provides for an alternative in the event the body is not accepted by the medical school because of it’s condition at the time of death.

Section 711.002(g) also provides that consumers may make their disposition decision in a will or in a prepaid funeral contract.

However, a will may not be located until long after the funeral has taken place and, for this reason, The Funeral Consumers Alliance strongly recommends against buying prepaid contracts.

Don’t forget that wills must be notarized and filed with the county clerk to avoid any “lost wills” or, claims the descendant died “intestate” ie: without a will.

I mention this because Kathryn Ogden impeded the funeral services that my father paid to Greenwood Funeral Homes along with my donated floral arrangements and memorial ceremony, simply to “show she could” as a sibling of the descendent, Gretta Fern Ozee-Thomas. I will never understand why any sibling would do such a horrific thing with no plans to either make arrangements or pay for them, Ms Ogden is directly responsible for her sisters body being held “in cold storage” for the month that left the body so badly decomposed, that this lovely lady was no longer recognizable.

This was perhaps one of the most deplorable acts I’ve ever seen that effectively left her sister, Gretta, waiting in cold storage as her body deteriorated waiting for the funeral home to FINALLY grant my father and I the right to bury Gretta. What a horrific thing for any family to endure! Protect yourself, your loved ones and your decisions by legally taking steps to ensure your wishes are properly met prior to actually needing them.

Do you need a funeral clergy? Help planning your memorial? Contact me at www.texastwinsevents.com for pricing and services. 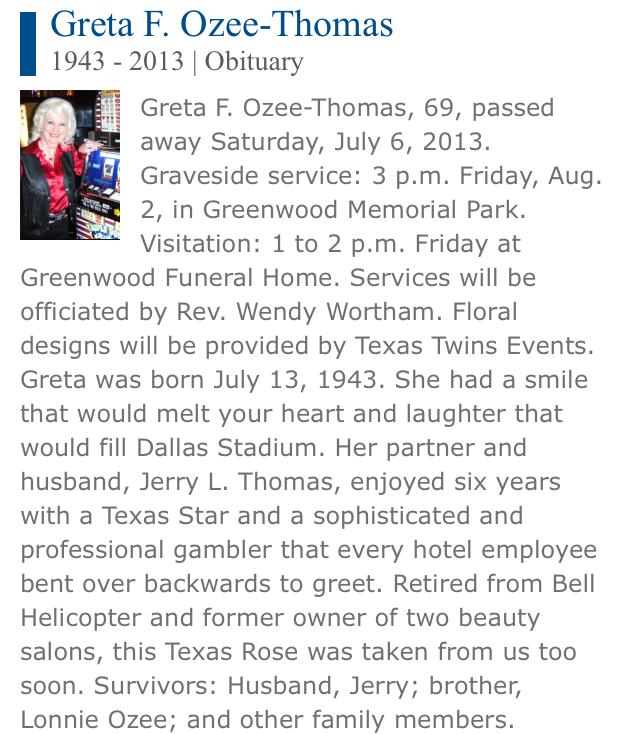 The Two States that have Stolen my Heart- Texas & California