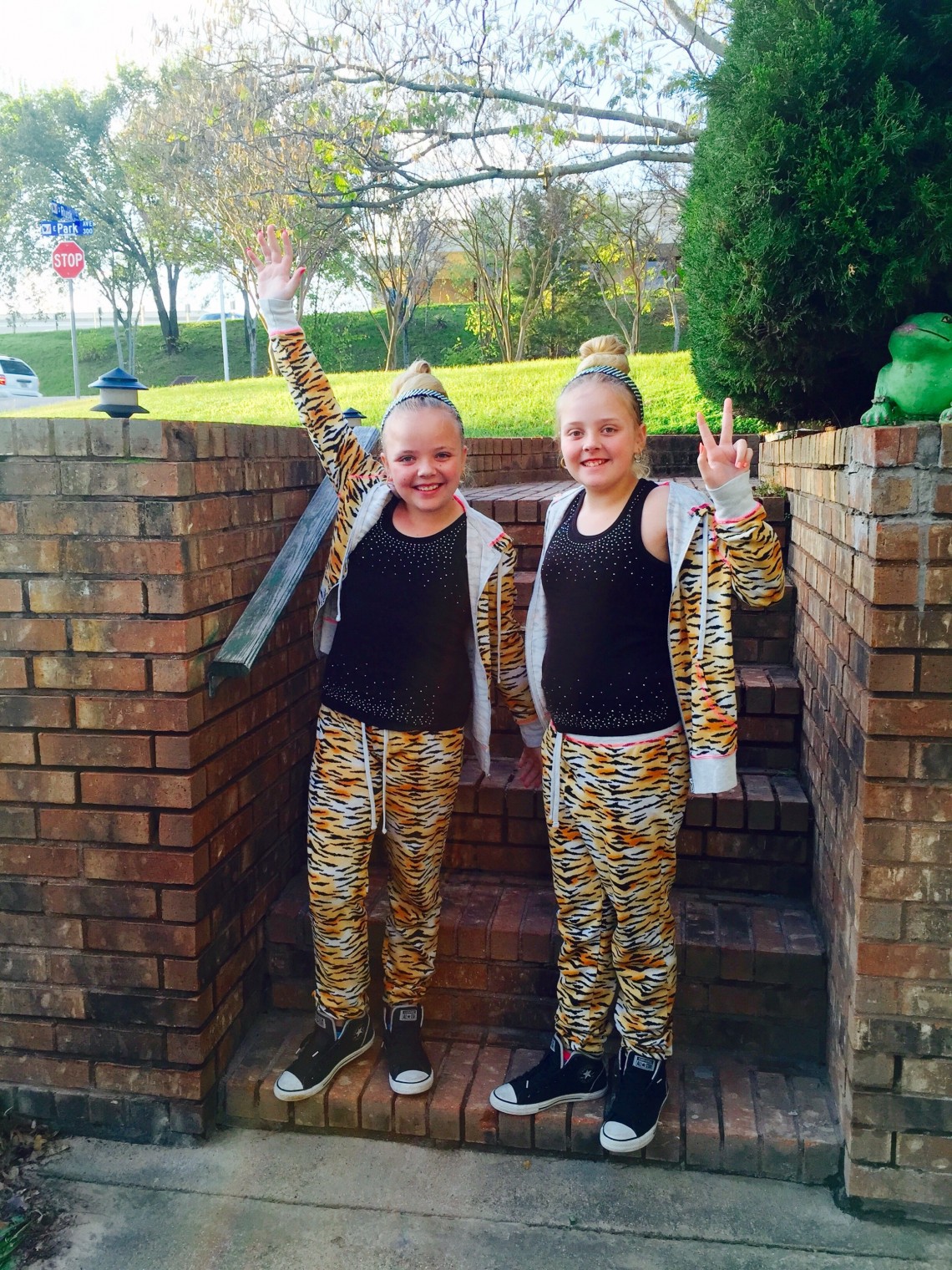 I operate on a schedule.  My family does not.  This isn’t a “newsflash” to anyone who knows us but, for those of you who don’t, I’m often called the “whip cracker” or “clock watcher” for very good reasons- I’m the only one around here who keeps my crew on time which often has us leaving some 2-3 hours ahead of schedule in order to keep from being late!  Yesterday morning, I started the wake up roll call at WorthamWorld with Maryssa and Makenna Mahaney to walk Foxy Wortham and start breakfast on our very busy day of my scheduled events. Their first request was to visit the Toys R Us for the Toys For Tots Event in Fort Worth. 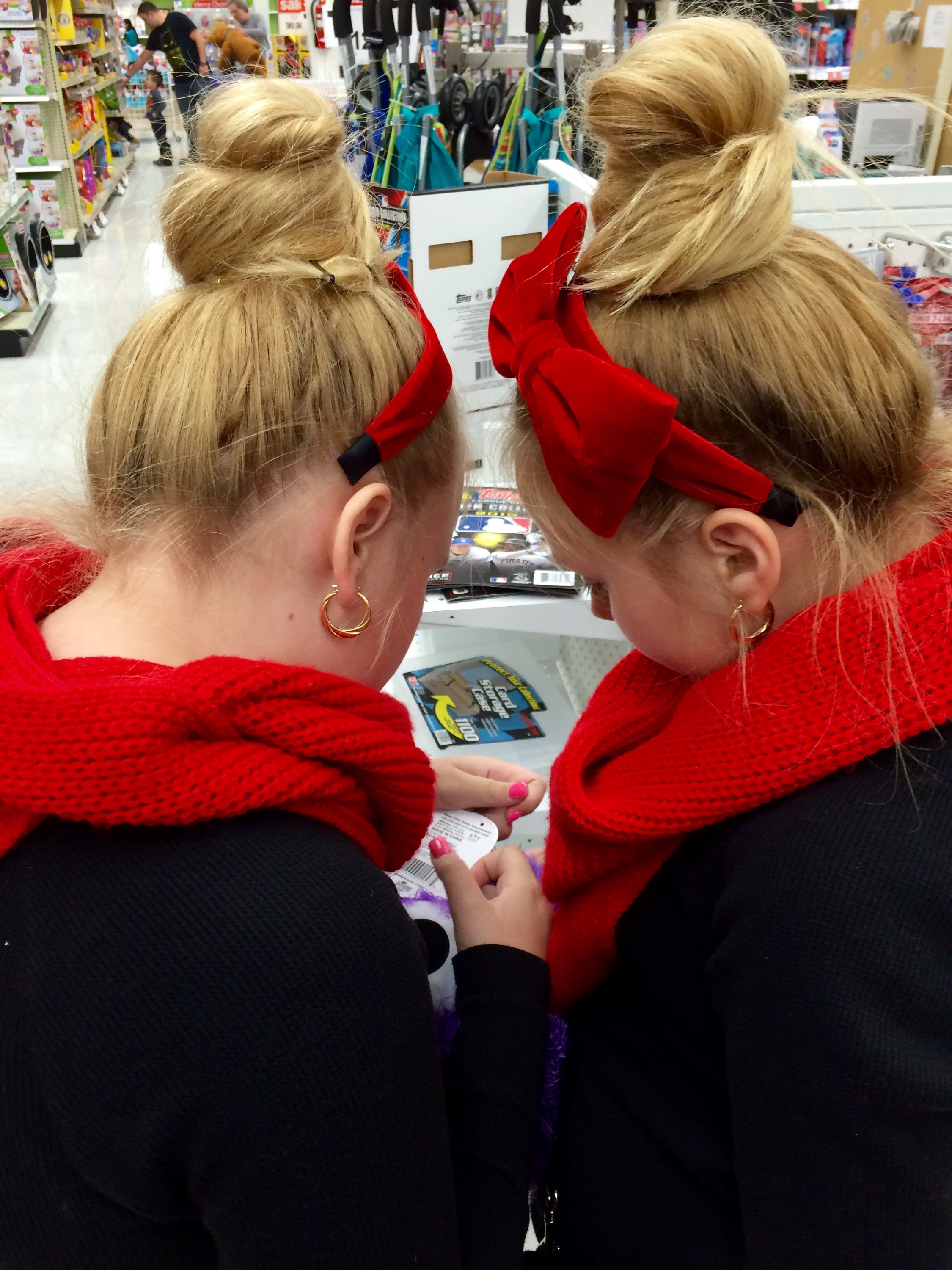 After carefully counting their allowances to “budget” their gift list while saving a few dollars for the “Good Friday” shopping adventure later this week, we loaded up and headed to Harris Hospital to visit my Aunt Shirley while checking in with my twin sister over at the DanielDivaDiggs on an ETA of when we might expect to see them in Fort Worth.  As usual, Cindy Daniel rattled off a list of things that needed to be accomplished prior to “heading into town.” 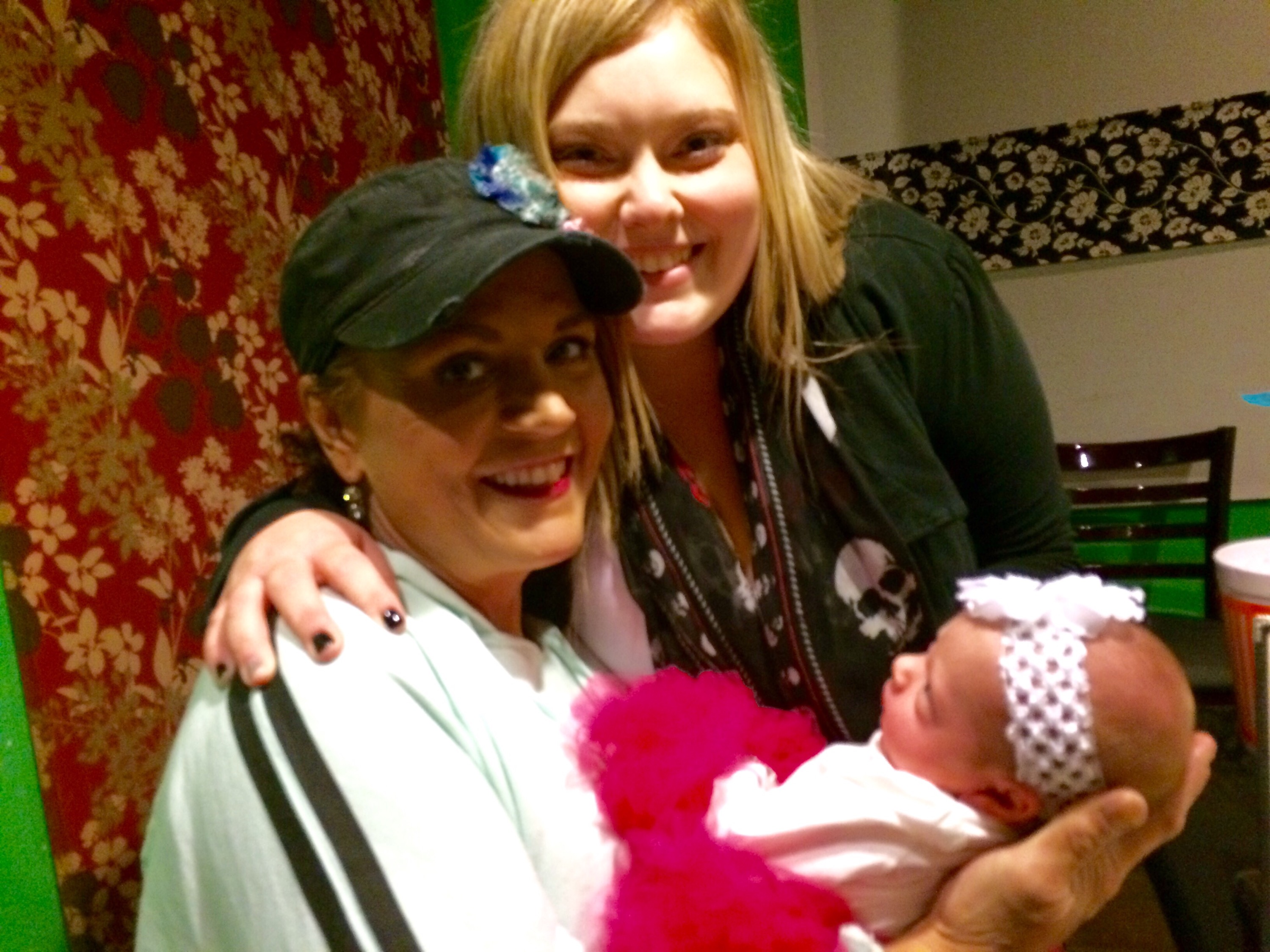 Tammy was unable to join this “traveling circus” that involved 3 vehicles and my multigenerational family who couldn’t agree on anything if our lives depended upon it.  Leigh Ann Blais drove her vehicle while Cindy and I both “helmed the wheels” of our suv’s. 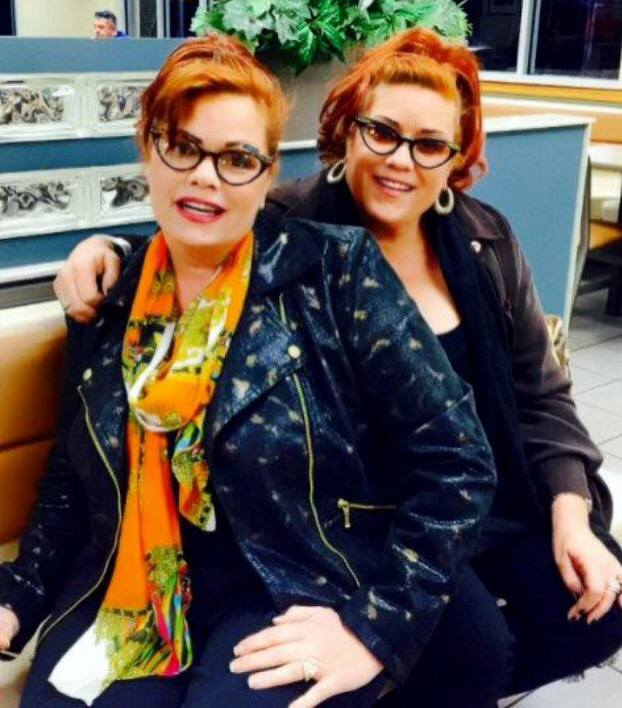 I called Cindy from Harris Hospital at approximately 2:00PM and advised her that we should be downtown prior to 3PM due to the roads being closed and was told “I’m picking Dad up and will meet you but, I don’t think we are going to hit your schedule sis, after all everyone is going to need to stop and eat.”  Okay, going out to eat with my family usually involves an argument over the “proposed” options and reasons why “so and so” doesn’t want to go there. 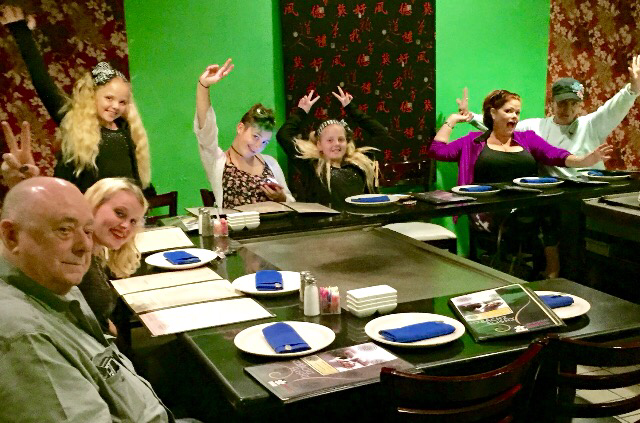 My Family Finally Argrees on a Restaurant- A “Photo Worthy” Moment

Getting my family to “agree” on a restaurant is like winning the lottery- I can’t get this group to agree on anything and since Tammy chose the restaurant in the above photo, they went along with the choice.  Now when I make a selection, it’s a wildly different and chaotic ensuing argument as to why my choice is unacceptable. 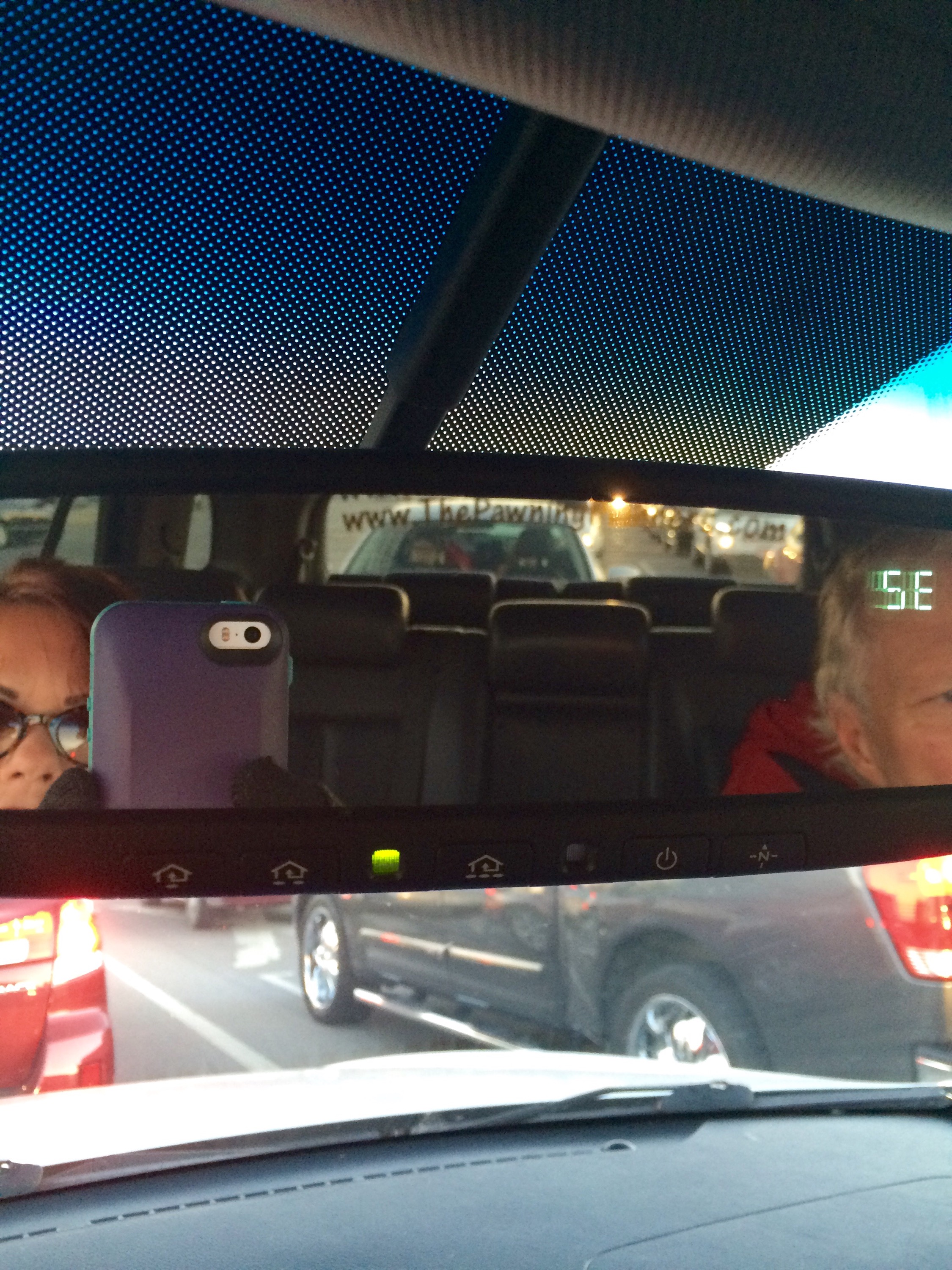 I often refer to any scheduled event around here as a “Three Ring Circus” for very good reason, everyone is going in a different direction!  After finally agreeing to go to Pei Wei, my family (once again) goes over the list of stops we need to make en route to getting downtown to the Parade of Lights (scheduled to begin at 6PM) the time? 3:15PM approximately three miles from downtown Fort Worth off 7th street. My options for drive they dining fall on the horrified ears of my three car caravan and I’m quickly “out voted” for sit down dining- I look at my watch and advise my family that we will never make it.  Cindy Daniel (again) advised me that “the parade doesn’t even start until 6, what’s the hurry?” 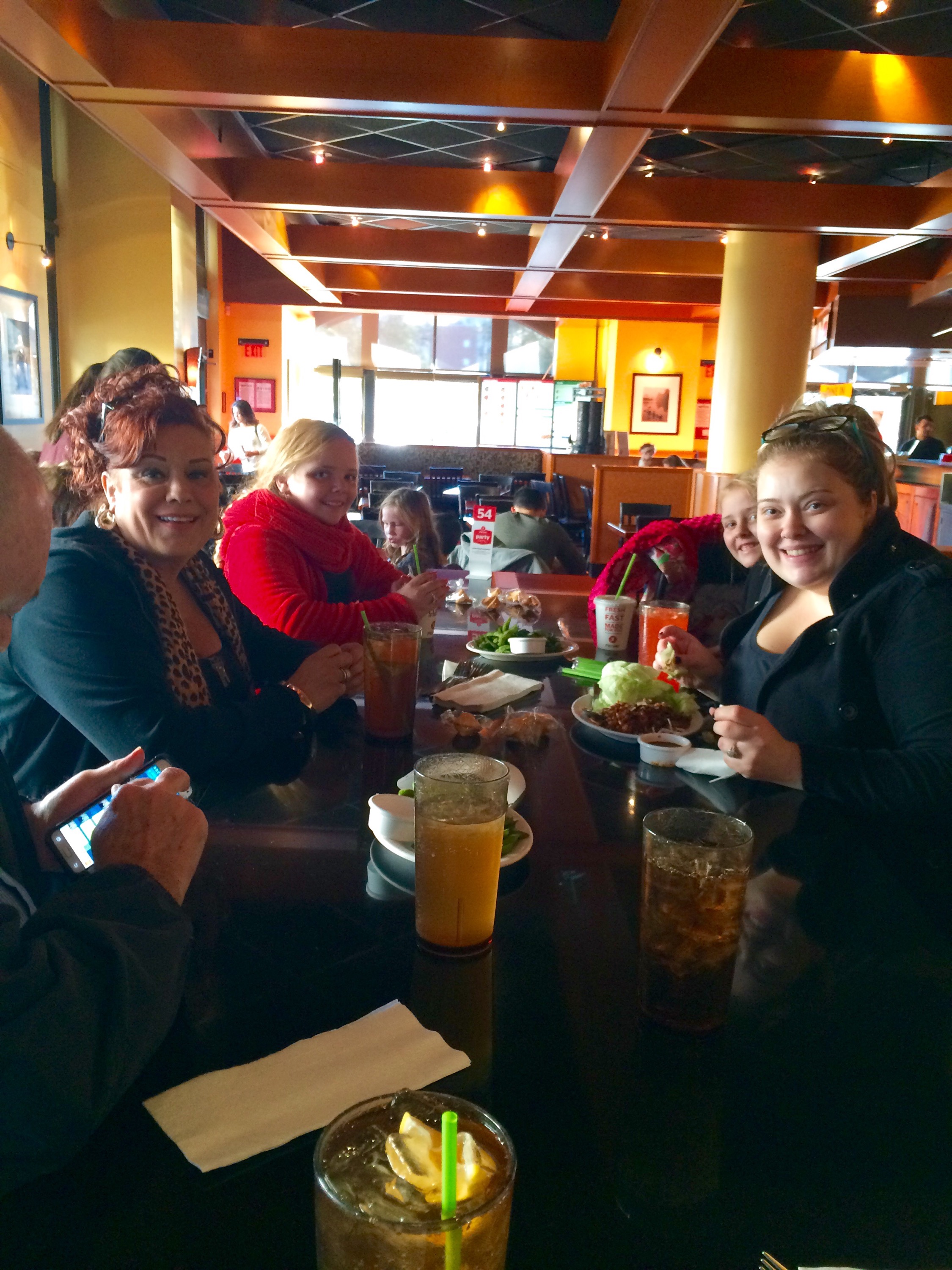 At approximately 4PM, my crew leaves the restaurant after checking in on FB with their phones (the one thing no one ever forgets, including the Little Pawners, are their cell phones), my brother in law, Steve Daniel gets into my SUV while the twins go with Leigh Ann to a snow cone establishment and my twin takes my father with her while we wait on Leigh Ann and the twins- I call my sister and advise her of the time (again) 4:20PM.  When my niece and the tiny Texas Twins finally get back to their vehicle for this caravan to get rolling done 3-4 miles from downtown- yet another “pit stop” is added to the list of Target for “gloves and hot cocoa.”  Loading back into our vehicles, the time is now 5:15PM and 7th street is at a standstill, so I advise everyone to take Henderson Street while anxiously checking the time, 5:31PM.  We wait through a congested street (with everyone else) while answering text messages and FB comments asking where we were from family and friends who somehow found a route into the downtown area that we obviously missed.  Stephanie Hafele didn’t event leave for the parade until 5:45PM and made it.  I try to orchestrate my group beginning at 3PM and yet, as usual, don’t get there on my timeline.  Rerouted at Henderson, we take Main Street at 5:59PM which is also blocked off and decide to park and walk the bridge with hundreds of other people.  My brother in law, Steve Daniel, is less than thrilled regarding walking “all the way into town!” 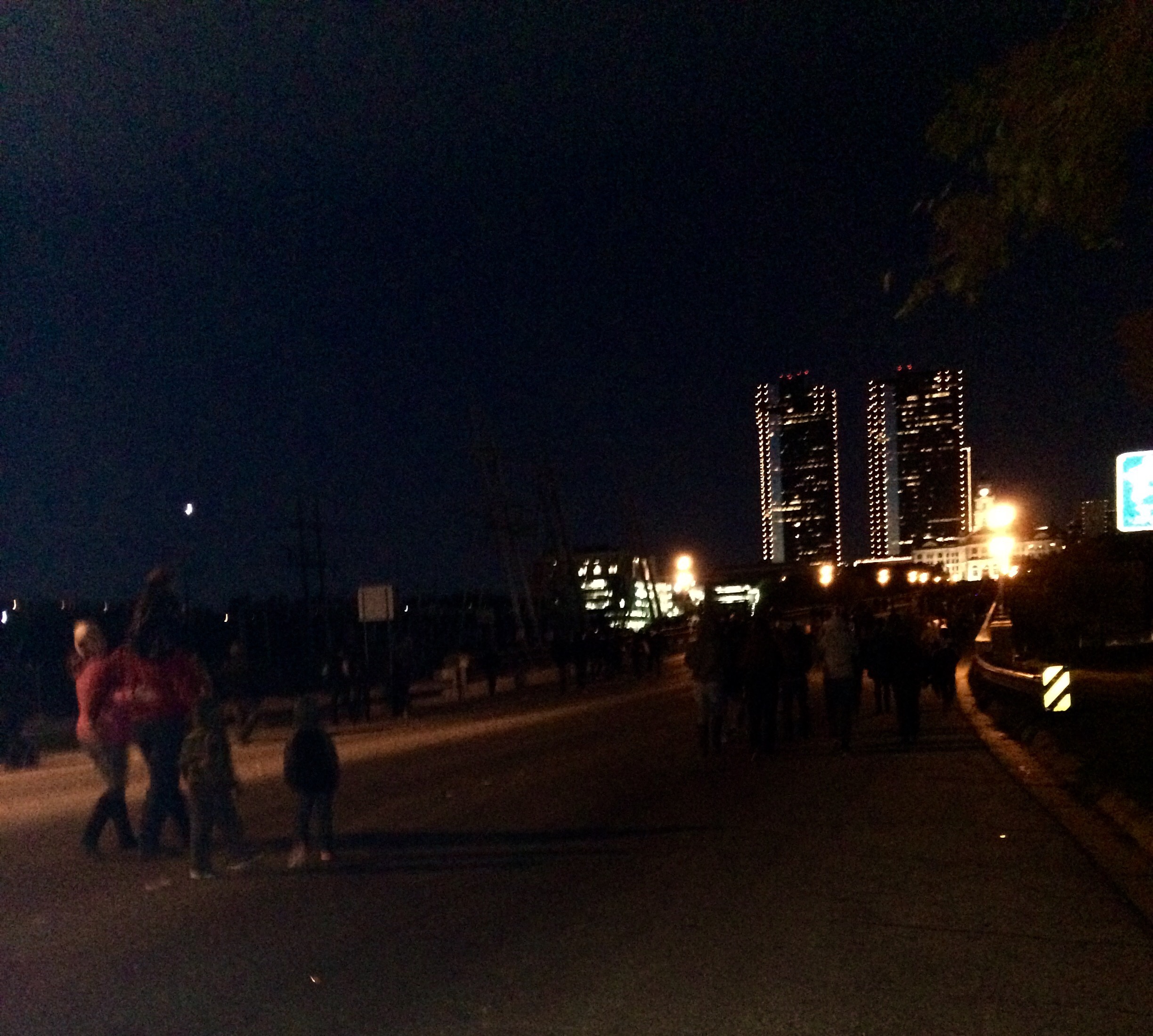 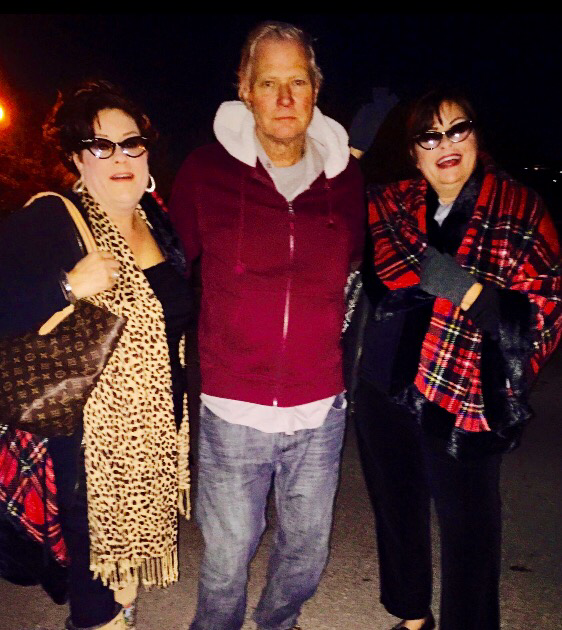 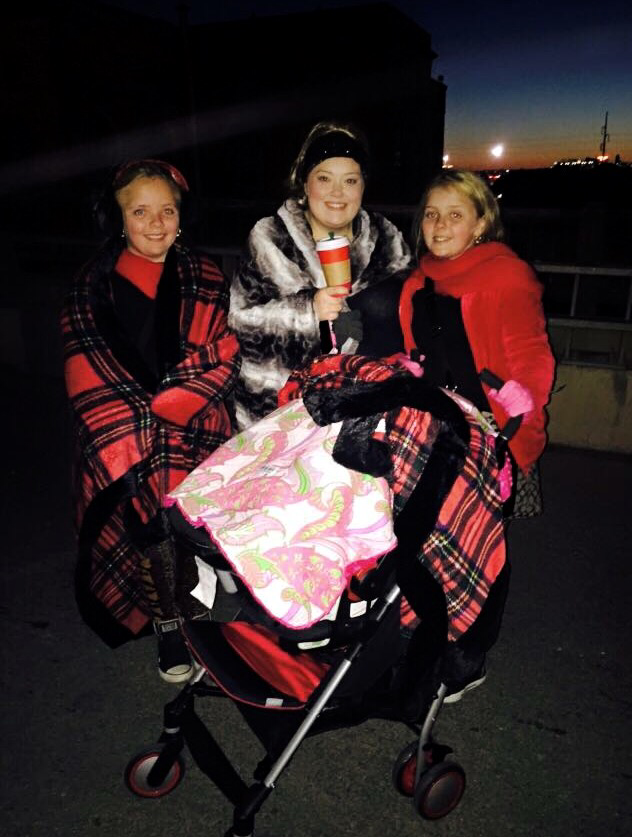 Realizing the parade had already begun somewhere towards the top of the bridge with my father waiting in the parking lot (unable to make the trek up the bridge with us), Cindy Daniel advises our team that “we are never going to make it in time for the parade, let take Belknap Street and catch the lighting of the tree.”  My group retreats back to our three vehicles and attempt to gain entry into the downtown area spending some two hours being stuck in traffic and never making it to the tree lighting as all of our other friends and relatives check in on FB from the parade!  We decide that the evening is a “wash” and to instead, drive through Rivercrest and look at the Christmas Lights- the twins are upset about this “escapade” and I attempt to cheer them up by giving them each $20 for Black Friday shopping at an area She’ll Station off Montgomery Street while Leigh Ann changes her baby, Madyson Blais. 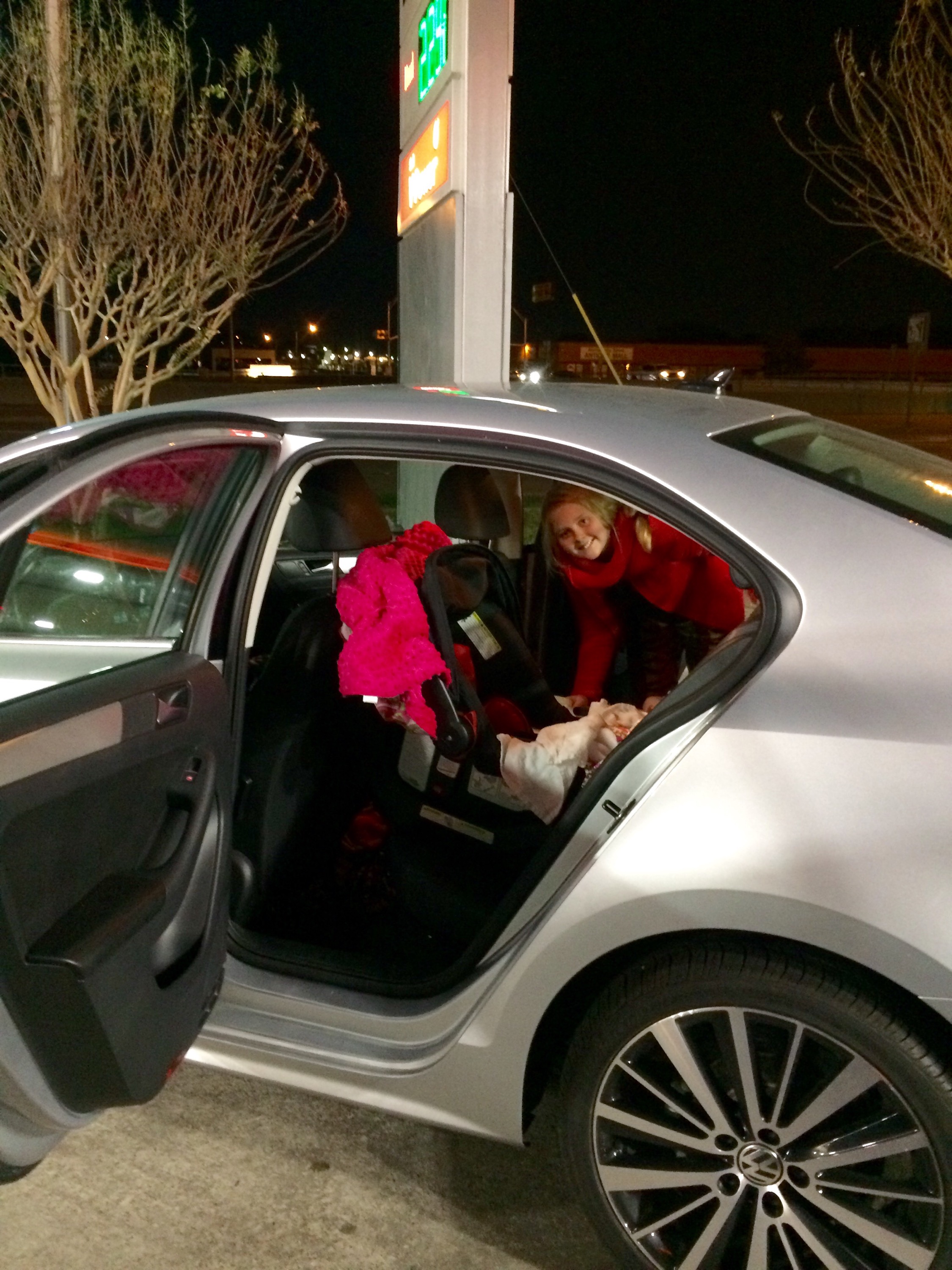 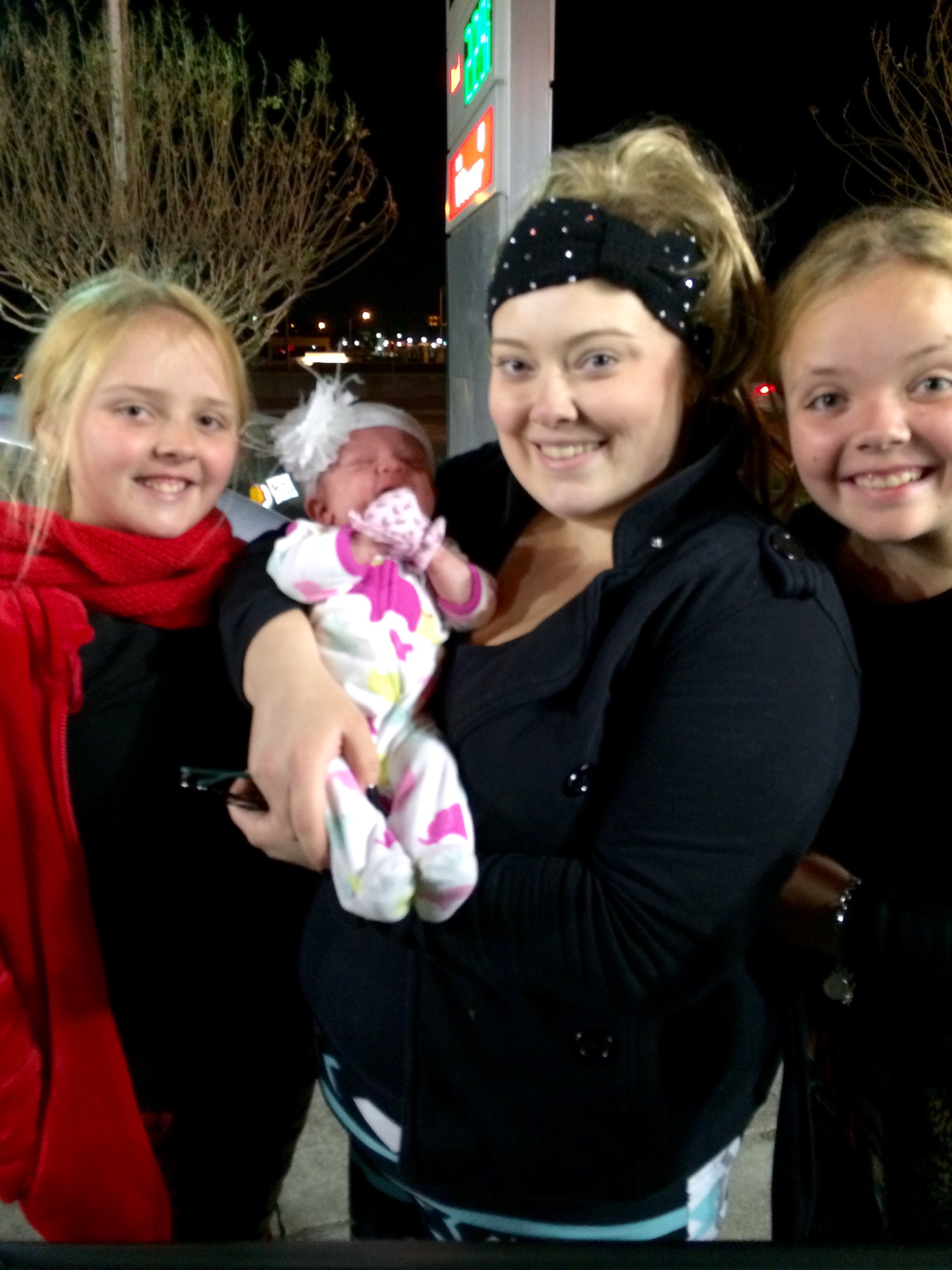 The time is now 7:42PM and my weary trio of Texas Twins Events drivers take a restroom break shocked that after all of this- we missed the parade, we missed the tree lighting and we spent most of our evening stuck in traffic.  Finally realizing that leaving on my schedule and getting into downtown would have effectively been a better plan, my multigenerational group of family members agree that “next year we will leave earlier and be downtown prior to 4PM.  I know that my stringent scheduling is often met with resistance but, perhaps my reasons for getting my group organized and ready “several hours prior to an event” is finally sinking in.  One can hope…
Wendy M Wortham Family Owned Wedding & Events Business