Budgeting & Bartering For Home Repairs At The DanielDivaDiggs…

Yesterday Cindy called me as I anxiously watched weather reports from home worrying about an outdoor wedding this Saturday and still recovering from the flu to tell me that State Farm wanted her trees trimmed.  Apparently, your homeowners insurer can enforce tree trimming?  Cindy suggested hiring Jesse to handle the trees and bushes growing near the eaves while I began to worry if old Jesse could handle such a dangerous job.

For over twenty years, Jesse has come up with ridiculous requests for odd jobs and often drops by after getting out of jail again to “suggest” new jobs my sister doesn’t need.

My entire family roll their eyes when Jesse knocks on the door to “pitch” a home improvement he thinks is necessary.  On a few occasions, Cindy and I have attempted to fix things ourselves at her home and we don’t always get it right-Wendy & Cindy At It Again-Home Improvement Or Home Wrecking?

Frankly, I don’t trust Jesse not to drop limbs on the roof and the last time Cindy hired a handyman to cut down a tree, he dropped it on the deck. She had tried to find Jesse to cut down the tree but wound up paying $1500 to someone who obviously had no idea how to cut down a tree.  Over the years, Cindy has fired Jesse and hired numerous other handymen but (like the tree that fell on the deck) they either took her money and ran or messed so badly on a project that Cindy had to “call Jesse back in” to fix whatever went wrong.

For over ten years now, the deck is still warped in the middle and her husband continues to “not notice” the problem.  Steve Daniel hates working on the house and will find anything to get out of fixing the deck.  Cindy would love to wake up one day and hear Steve announce that he’s decided to fix it but that will never happen since Steve blames the handyman for the deck damage.  My twin sister “came up” with (yet another) #Cindyism Quote regarding home projects and her husband “Just like a blister-showing up when the work is done!”

Finding a reasonably priced handyman who knows what he is doing is a real problem for Cindy and I.  Offering a barter to Jesse to try and save a buck out of our pockets on the Ford sitting in the driveway was my idea.  Jesse saw a ladder in Steve’s shed that he wanted and told Cindy he would take $20 off the tree trimming if she would throw in the ladder.  Knowing the ladder was worth $350, Cindy locked the shed to ensure the ladder didn’t “come up missing.”

My sister and I are pretty sure over the years that Jesse has helped himself to a weed eater, hedge trimmer, wrench set and more.  Jesse is always trying to find a way to get something for nothing and pay tickets before winding up in jail again.  Jesse has been arrested 30 times for unpaid traffic violations over the years and is somewhat untrustworthy. The fact that I know this guy isn’t licensed or bonded did nothing to faze my sister as the usual round of dickering over the price began.  For years Jesse has “belted out” his price while Cindy knocks it down.  This “negotiation” can take hours or days with each of them arguing why their price is fair.

On more than one occasion, Cindy has left Jesse a check under the mat and noticed the following day that not only was the check still there but the work had not been finished. The reason?  Jesse was in jail again!  Jesse has a horrific driving record and everytime my sister tries to find this guy- he’s usually back in jail for not paying traffic tickets.

Personally, I don’t get along with him and neither does Leigh Ann when he shows up to ring the bell and advise us “we need this or that done” because (let’s face it) he needs the money and creates jobs that don’t really exist!

Since I’m finally feeling a little better today and planning to visit the park to see where we can seek shelter Saturday if rain threatens to ruin my park wedding, I’ve advised Cindy not to pay Jesse until the work is all done because this guy is so sketchy that disappearing before the work is done wouldn’t surprise me in the least.

I wish we could find a more reputable handyman for Cindy but for some reason, she has become “used to” Jesse hanging around and arguing over prices.  He drives a hooptie with a lawn mower hanging out of the trunk and is fairly cocky for a guy that lacks a regular job.  He and I argue frequently regarding the quality of his work-my sister is far more relaxed about the mess he leaves behind and his lack of attention to detail.  Jesse has a chip on his shoulder towards my nieces and I and wishes we would “butt out” of his business but whatever he messes up-we will end up cleaning.

Last year, Cindy had an issue with her retaining wall and brick steps coming apart and (no surprise), Jesse stopped by and offered to fix the bricks for $2-3k.  He knew darn well the price was far too high and he intentionally “starts high” everytime he and Cindy battle over repair costs.

As I wearily watch Jesse and his crew cut down the limbs over the house, I’m hoping they don’t damage anything in the process.

Several years ago, I had to hire “real contractors” after Jesse left my sisters house in a mess over a small kitchen project-More Home Repair Projects With The Twins.

The truth is that hiring someone who doesn’t know what they are doing can cost you in the long run but after 20 years of Jesse and his sloppy work- my sister prefers to use him than look for a real handyman so hopefully this latest project won’t be the disaster I’m expecting…Update-I was right!  Cindy just sent me a text that Jesse had found more problems and his initial bid was going up by 32% “because this is going to take a lot more time.”  As usual, Jesse uses the skills of a seasoned con man to get my sister to go along with him. 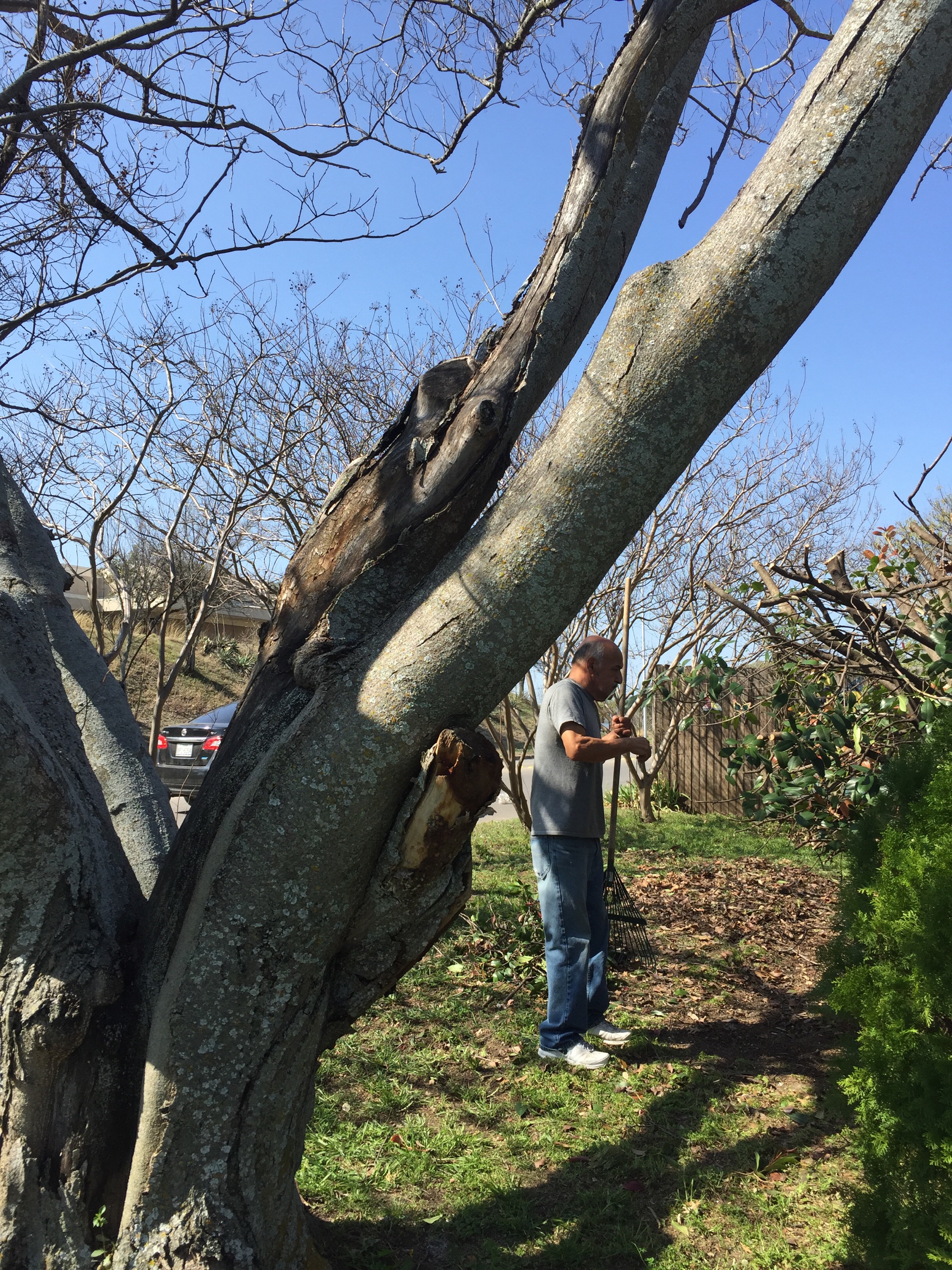 I told her to dig her feet in on the initial bid a few minutes ago since I’m not at her house and she has already “caved in.”  Maybe one day we can find a reliable handyman but since Cindy always needs help and doesn’t have the time to look-it won’t be anytime soon.