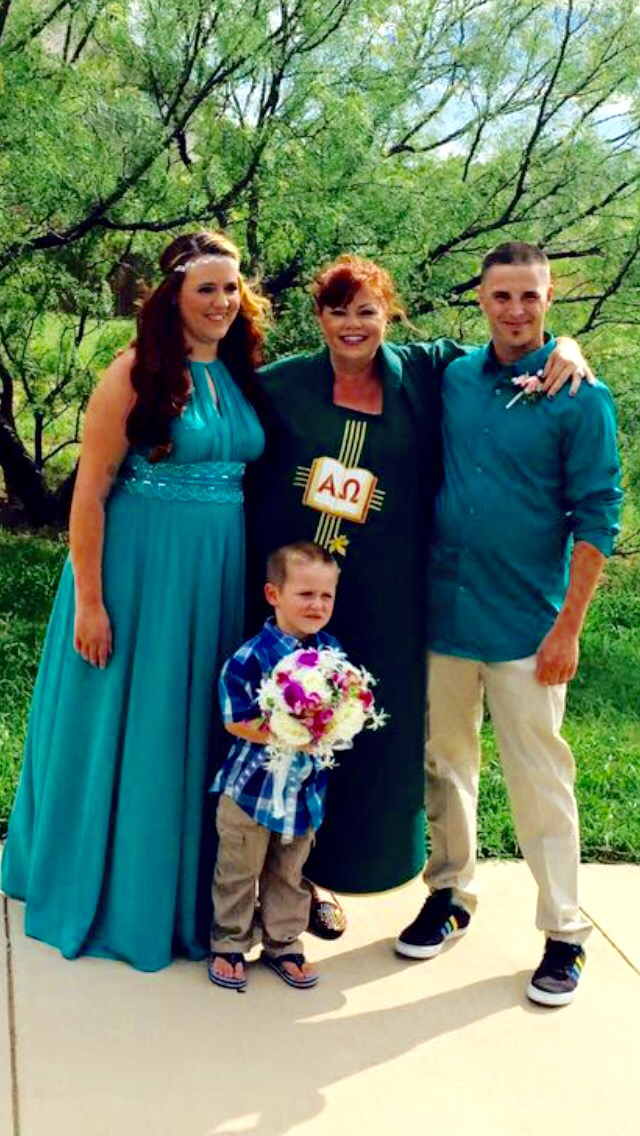 I’m often asked why I wear robes to officiate at weddings, funerals, baptism or other religious occasions and today am going to go over the history of a clergy vestment. Many of my fellow clergymen feel more comfortable wearing black with a collar and I am apparently an exception based on the amount of inquiries I’ve received over my attire. 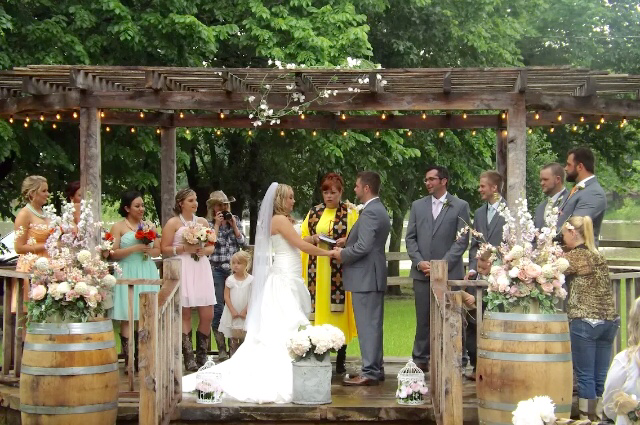 The vestments of the Christian church derive from both the common and imperial attire of Ancient Rome, and have been regulated over the years by custom and rule. The use of distinctive clothing first began around the time of Constantine (circa 274-337) when the ministers of the church began to adopt the respectable clothes specific to state and solemn occasions. These clothes, the fashions of imperial Rome, provide the basic template of vestments today. 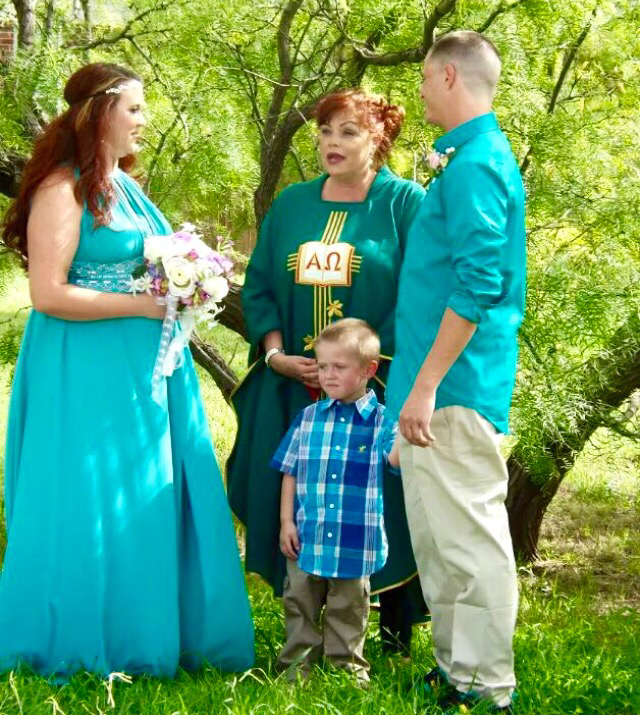 Over the years these fashions have not changed, largely due to the clergy’s conservative attitude toward the fickle fashions of the world.  The paenula or casula, eventually replaced the toga.  The paenula may be the most common and universal of human protective attire worn throughout the ages.  In modern America we call it a poncho.  It consists of a large piece of cloth with a hole in the middle for the head to pass through.  Several of my vestments have snaps or zippers due to my hair and frequent use of hairpieces (weaves) after losing my hair completely due to issues of thyroid cancer and it was during this time that I became a huge fan of hair pieces and regularly wear them today. 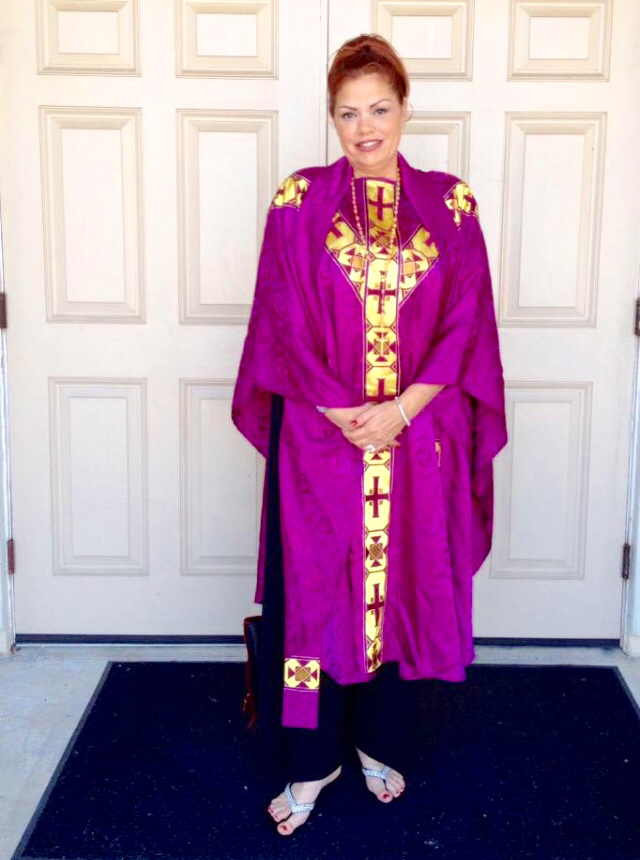 My extensive assortment of vestments and robes are from abroad and out of the country.  Many of my robes are gifts from Rome or Europe while others I have traded on Ebay in exchange for vintage vestments that are often up to 100 years old.  I do not like hoods as the neckline tends to drag across my incision from a full thyroidectomy and cause me discomfort. Christianity ‘s legalization freed Christian leaders to wear garments and accessories that openly reflected their personalities. Change for the sake of change was not characteristic of the church in Roman cultures, liturgical vestments would continue to reflect their apostolic roots.  During the fourth and fifth centuries, Christianity established itself as an institution distinct from the secular realm and maintained a style of dress similar to what Jesus and his followers wore. 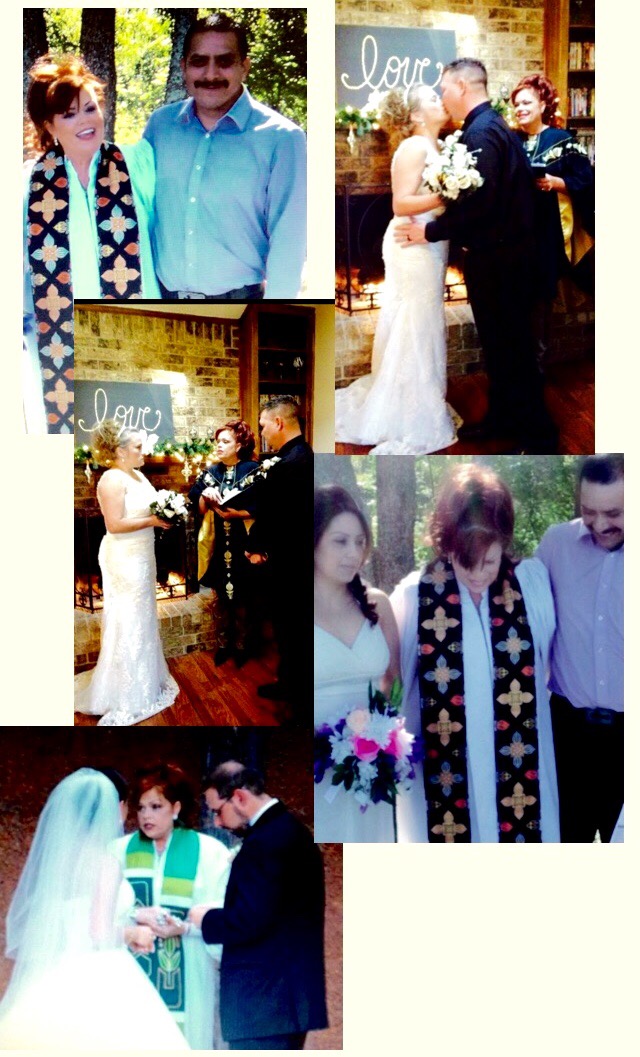 Early writings of the church frowned upon shorter versions of the vestment and, all of my vestments are long to cover clothing worn under the vestment.  The flowing fabrics of silk, cotton and ornaments of the clergy stole are made to accommodate movement and actions during a baptism or wedding ceremony.  While vestments have never gained a worldwide acceptance with the majority of ministers or officiants wearing either a black suit or white robe, I prefer a vestment over these choices based on comfort and appearance. 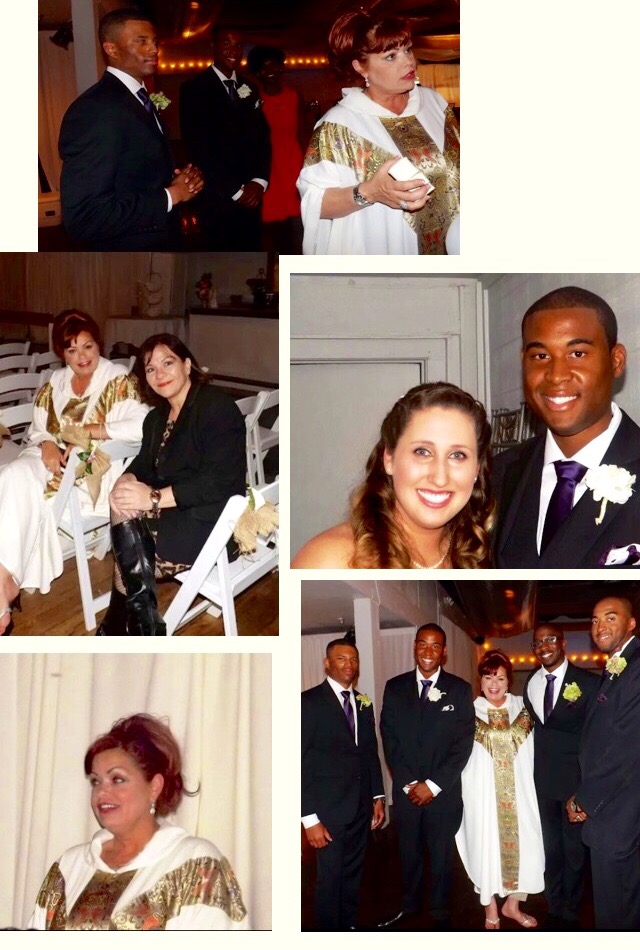 Even in the earliest books of the Bible, God directed his ministers to wear specific apparel.  God commanded Moses to remove his shoes while on the mountain (Exodus 3:5) and directed that Moses’ brother Aaron wear special clothing to set him apart as a priest: “You shall make sacred vestments for the glorious adornment of your brother Aaron.  And you shall speak to all who have ability, whom I have endowed with skill, that they make Aaron’s vestments to consecrate him for my priesthood” (Exodus 28:2-4; compare Exodus 20:26;, 29:4-9, 28:42;, 39:27-28, and Levitcus 16:3-4). 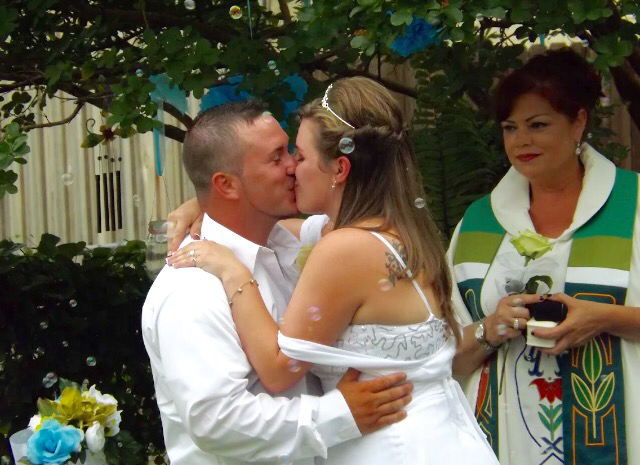 Wearing uniforms is a basic human tendency.  Besides identifying a persons function or office, they also herald ceremonial occasions.  They are usually worn within a particular domain (church or hospital) and often signify that domains hierarchy (minister, doctor, volunteer, etc.)  they may also demonstrate a complexity of interrelations by using colors, shapes, insignias, etc. that provide rank and relationship to others as we often see on uniforms within the military. 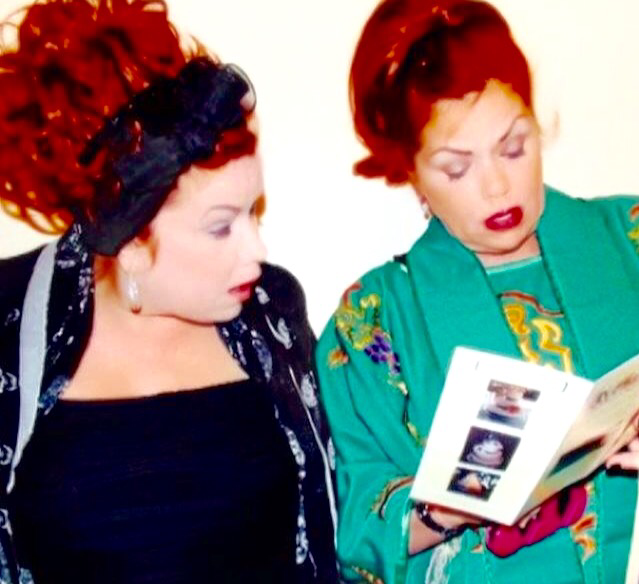 I spend a lot of time outdoors during wedding season and live in Texas, the heat is often intense and therefore, seeking a more comfortable alternative was based on necessity as a black suit and collar would not last any length of time on this Texas Twin! 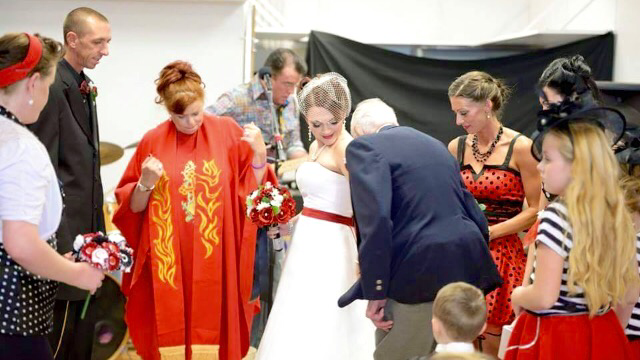 While many ceremonies are also indoors- after officiating hundreds of ceremonies over the past three years, I’ve decided that ease of movement, comfort and the attire I have and wear- suits me.  Furthermore, my robes not only provide comfort but also easy recognition of my identity at an event. 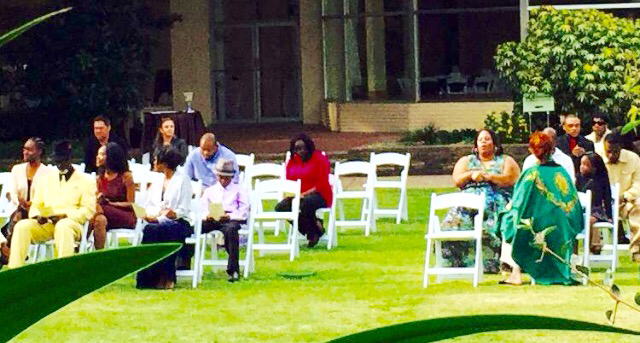 Whether I am at a wedding or funeral, baptism or christening, my role is one of not accommodating questions regarding my choice of attire and, rarely during events has come up.

However, several months ago, a mother of the bride requested that I change clothes to accommodate her aversion to my canary yellow vestment at an outdoor venue with warm ranch toned colors that I had discussed with the bride months ahead of her renewal of vows as is a customary discussion with my clients. 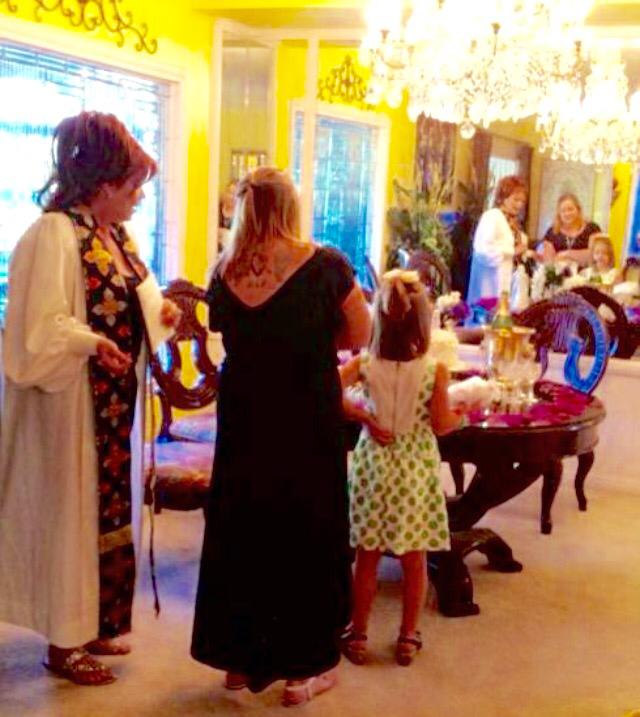 While I find the numerous questions regarding my clothing or attire interesting, it has been on only one occasion that my attire was an issue for the mother of the bride which obviously had no impact whatsoever on me.  Asking me to change clothes is considered “guestzilla” behavior and is perhaps as over the top as you can get. The fact that my team and I were requested to a arrive several hours prior to the ceremony itself gives you a better understanding of the characteristics displayed at the wedding with the Guestzilla and requesting that not only I but also my team change clothes to suit the tastes of the guests is considered rude and incredibly insensitive by anyone associated with me or, my businesses. 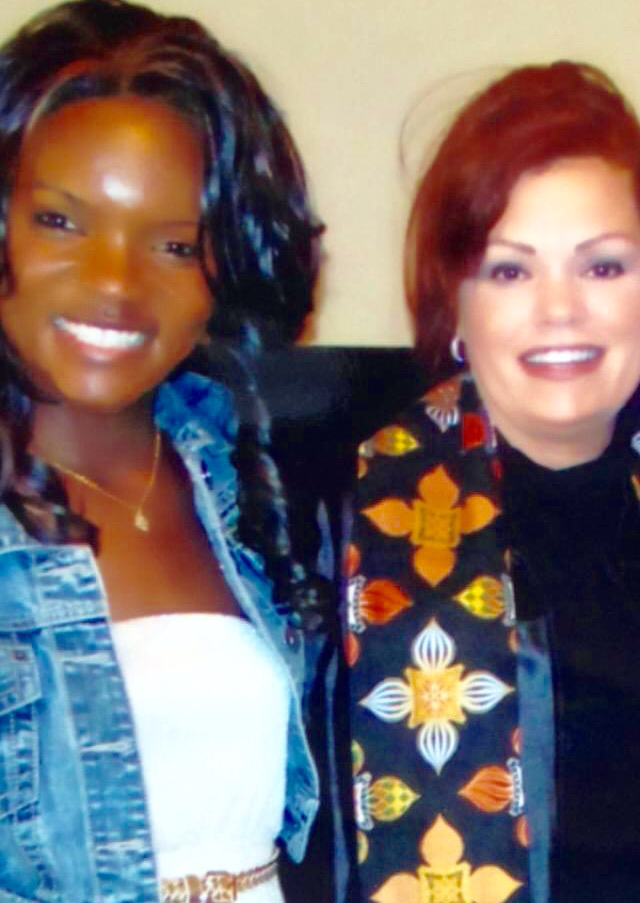 If your event is being filmed by our production team, they will be dressed for comfort and ease and not wearing “dress clothing.”  They are not on wedding photos or videography and are very good at what they do.  Often, we forgot we are even being filmed and you will too. 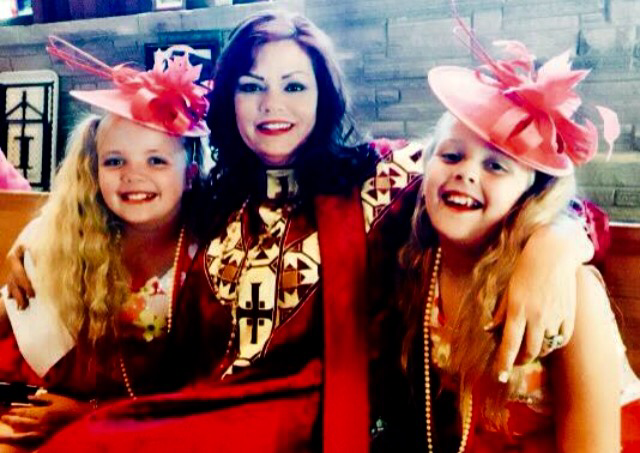 While my team and I have a relatively quick sense of humor and accomodation,  if someone had an issue with attire, it was assuredly an issue that should have been addressed earlier than at the time of the actual event and, the attire of my film crew, photographers, sound men and assistants is NOT and will never be subject to a clients “opinion” of how they should dress since they are filming  the event and appear NOWHERE on wedding photos or video.  We have a very professional team and production company who are often crawling over, around and under tables, furniture and people to photograph, videotape and film our travels and find “ideas” or “theories” regarding their attire to be offensive and intrusive. 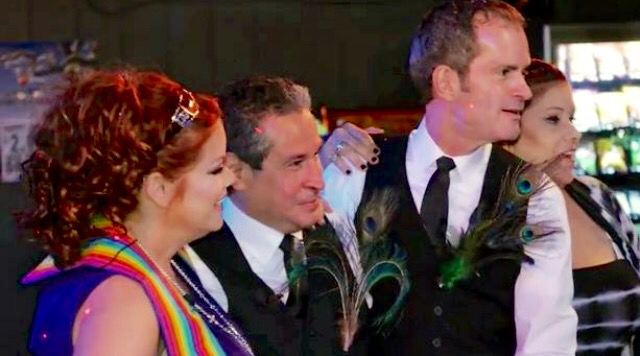 I’m hoping this addresses that many questions regarding what I’m wearing and why and welcome your feedback.  Weddings and ceremonies are my business and because of this- I attempt to address your questions quickly and efficiently to the best of my abilities. 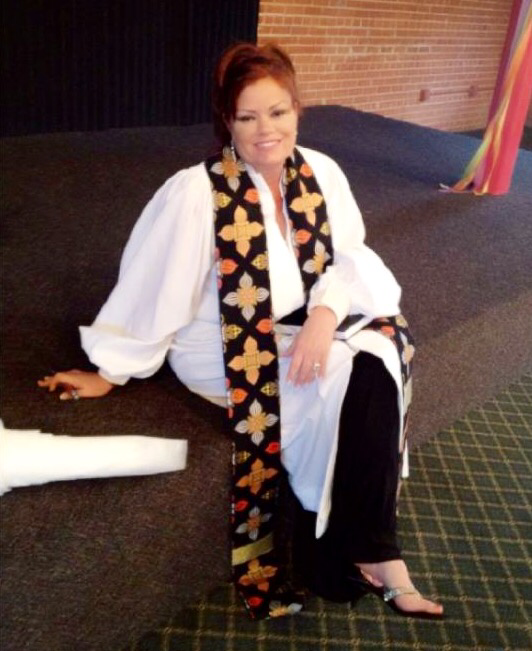 Many ministers also wear a stole with their attire or suit, the stole is not a necessary part of the wardrobe but is an accessory and most of mine are gifts from friends around the world who have graciously gifted me these items and therefore, why I’m often wearing one to honor the talent and commitment of our many friends who took the time to handcraft something because they simply wanted to to something to contribute to my cause of affording anyone a beautiful ceremony regardless of their income and the sole reason I created two unique and diverse companies to afford anyone a Dream Event. 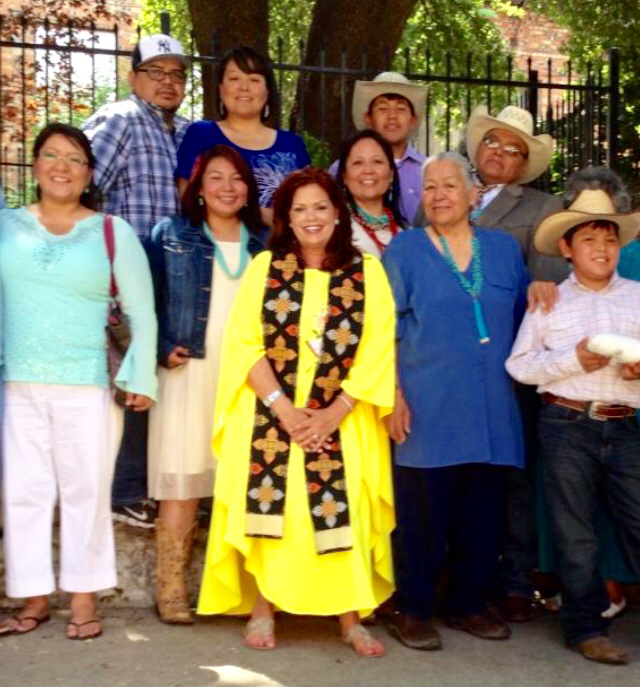