The Flag Folding Ceremony represents the same religious principles on which our country was founded.

The canton of blue, with it’s stars representing each of the states our veterans served in uniform, denotes honor. The canton field of blue dresses from left to right and is only inverted when drapes as a pall on the casket of a veteran who honorably served our country in uniform.

In the evening the Armed Forces of the United States, at the Retreat Ceremony, after taps have been sounded, the flag is lowered and folded in a triangle fold and kept under watch throughout the night as a tribute to our nations honored dead. The next morning it is brought out at the ceremony of Reveille and run aloft as a symbol of our belief in the resurrection of the body.

The First Fold of the flag is the symbol of life.

The Second Fold is a symbol of our belief in the eternal life.

The Third Fold is made in honor and remembrance of the veteran departing our ranks who gave a portion of his or her life in defense of our country to attain peace throughout the world, that their service was not in vain and shall never be forgotten.

The Fourth Fold represents our weaker nature, for as American citizens trusting in God, it is to Him we turn to in times of peace as well as in times of war for his Divine guidance.

The Fifth Fold is a tribute to our country, for in the immortal words of Stephen Decatur, “Our country in dealing with other countries, may she always be right but it is still our country, right or wrong.”

The Sixth Fold for this is where our hearts lie-and it is with our hearts that we “…Pledge Allegiance To The Flag Of The United States Of America And To The Republic For Which It Stands, One Nation Under God, Indivisible, With Liberty And Justice For All.”

The Seventh Fold is a tribute to our Armed Forces, for it is through these same Armed Forces that we protect our country and flag against all her enemies, whether they are found within or outside the boundaries of our republic.

The Eighth Fold is a tribute to the One who entered into the shadow of death, that we might see the light of day and this fold is made to honor Mother, for who it flies on Mothers Day.

The Ninth Fold is a tribute to our womanhood, for it has been through their faith, love, loyalty and devotion that the characters of men that have made this country great have been molded.

The Tenth Fold is a tribute to Father, for he too has given his sons for the defense of our country since she was first born.

The Eleventh Fold, in the eyes of a Hebrew citizen, represents the lower portion of the seal of King David or King Solomon and in their eyes glorifies the God of Abraham, the God of Isaac and the God of Jacob.

The Twelfth Fold, in the eyes of the Christian citizen represents an emblem of eternity and glorifies in their eyes God the Father, God the Son and God the Holy Ghost.

We fold the stripes towards the stars for whereas the stripes represent the 13 original colonies that founded our republic and they are now embodied in the 50 sovereign states represented by the stars, so that the stars cover the stripes.

When the flag is completely folded, the stars are uppermost, which reminds us of our natural motto, “In God We Trust.”

After the flag is completely folded and tucked in, it takes on an appearance of a cocked hat, ever reminding us of the soldiers who served under General George Washington and the Sailors and Marines who served under Captain John Paul Jones and they, followed by their comrades and shipmates in the Armed Forces of the United States, have preserved for us the rights, privileges and freedoms which we enjoy today.

Texas Twins Events/The Pawning Planners and Reverend Wendy Wortham respect the sacrifices made by our military members both active and retired by offering year round discounts on all of our services. 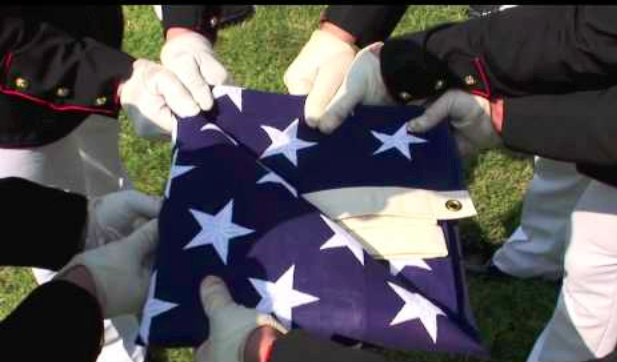 A Military Family Taught Me Many Things as a Child, Respect, Honor & Punctuality

A Bridezilla or GUESTZILLA Clause? Yes, No One Needs the Drama, Including Me